It’s been a busy few months, what with a whack of readings thus far in December, January, and February. The good news is that there are even more events planned for both March and April.

Having just made a trip down Nova Scotia’s South Shore to Lunenburg’s Lexicon Books, I’m now really excited to announce that I’ll be back reading in Toronto, ON, again in March (and ‘launching’ my new collection, Some Nights It’s Entertainment; Some Other Nights Just Work), on Wednesday, March 8, 2017 at 8:00pm at Pivot Readings, which is held at The Steady Cafe (1051 Bloor Street West, Toronto, ON).

Pivot Readings at The Steady happen every other week and aim to present the writers breathing life into Canadian literary culture. Established and emerging, time-tested and fresh; they’re what’s happening in literature, right now.

In addition to my reading a selection of the poems from Some Nights It’s Entertainment; Some Other Nights Just Work, published by Gaspereau Press in Fall 2016), this packed edition of Pivot features poet/editor/facilitator Puneet Dutt, novelist Nora Gold, and writer/speaker/teacher Hal Niedzviecki. 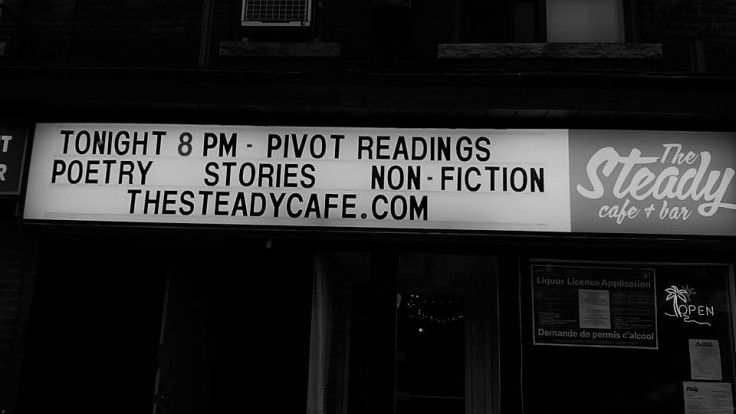 Things are set to begin at 8:00pm, but be sure to come early enough to grab a good seat and chat it up with friends and poets beforehand. Admission/cover is “pay what you can”, everyone is welcome, and books will be available for purchase on site.

I’ll also have copies of some broadsides (Bear, Harbour, etc.) as well as chapbooks for sale, for those interested in something more than just books.

Hope to see you there, Toronto folks!

This site uses Akismet to reduce spam. Learn how your comment data is processed.