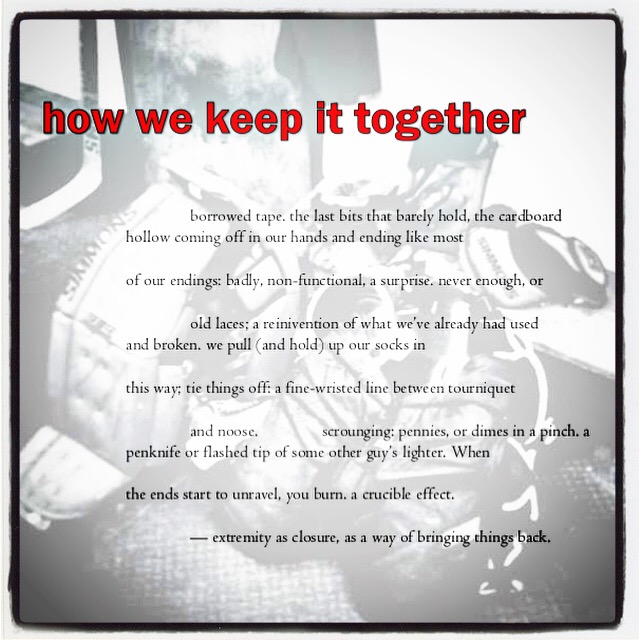 they’ve gone, it would seem; gone and
changed the rules. what we thought we knew, falling
in on itself. all feral
centripetal. the old rotary has gone roundabout;
given in.
and this change, you might think, this
new line of thought – if you were
to spy it all from a distance – is getting us nowhere.
it’s only a constant worrying
of old blacktop blanketed snug by some new; a circular
logic. squint-seen, it’s performance,
suggestion – a suggestion of some sleight-of-hand
here at the tip of the arm: the near
magical pull of some deep-seeded magnet now spinning,
we’d guess, completely
and fully out of control – a crazed, elemental
ballet. so many iron filings in constant pirouette.
and it all only skirting
the crux of an issue. or, perhaps, this is
simply and only some city planner’s end-of week desktop
playing at god, asphalt parable. just more
arcane lines and lessons. about waiting
one’s turn. about turning corners; about
the slowly arced knowledge of some concept we’ve come, over
time, to call patience.

[Circa 2009, from a series of poems about Halifax, NS; also appeared in Grain (2009). Available as a limited edition broadside produced by Gaspereau Press (2009).]

i know hate, its line-
mates. believe me. you kids have, i’m sure,
wasted—all early morning anxious
and weak-ankled—their first impatient
shuffle-kicks and curses on me. no cage
contains a stare that well. and despite
my perch, i too know damage: precise,
zeroed-in maps of possession and loss, traceries
step-chiselled into moments that loop
around and into—through and across—
each, the other.                  at my worst, i am
my own recurring dream, forever turning
a corner.           and because i am always,
when push comes to shove, behind glass
—seated, and away—i’ve become a fan of
jealousy, can pick him out in the looping
confusion of warm-ups. i have his sweater
hanging somewhere on my wall, his cards
tucked in a box under my bed.              indulge
me.         tell me: can you understand what it is
to be something most others only wait,
grudgingly, through; endure?       i can and
do, can and do.         i am a common
cold, the advertisements that linger too long
before a feature.            and though you
may never see this, the lights—i can assure
you—go down each night; the scoreboard’s
bulbs snap and flicker, then die. but the ice,
it seems, will always be there: a constant wound
to dress, a scar i run myself along and over.

[From Geist No. 53; also published in the chapbook tracery & interplay and the collection no cage contains a stare that well.] 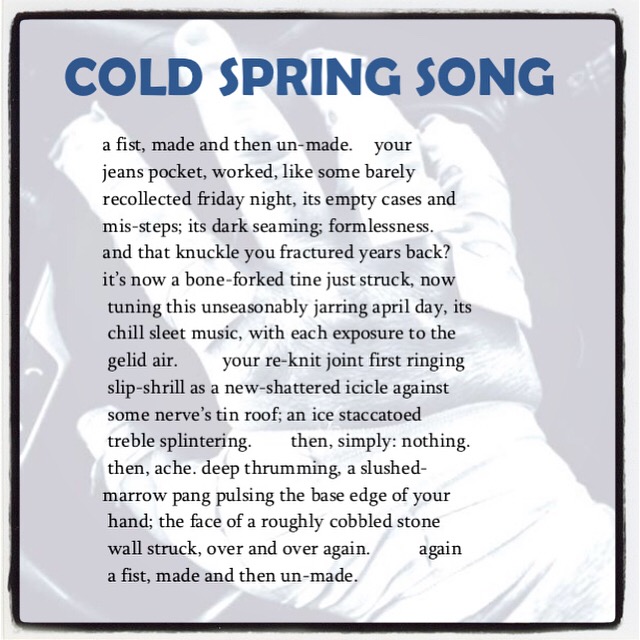 ‘A myth can be the distillation of sacred truth or simply a lie repeated often enough. Hockey is a bit of both.’
— Don Gillmor

my friend: to unfurl and then
wave wide the flag, or to sing
all high-collared and near-cherryesque hoarse

the rough praise of a windsor
— its schoolboy ponds —
or of a mcgill and its montreal rules!, is to —

i hope we’d agree in this cool
morning’s haze of propane and sleep — miss the point.
it’s a precision gone wrong, gone

awry; a poorly-timed power play.
the errant half slash of an ill-advised backhand
pass, this is all a blizzard of nonsense

that we need not re-hash. so let me say
just this: the skate’s steeled rhetoric
is cruel; cuts — you might say —

to the quick. it has no time for still.
so let’s move — if we may —
to our common ill: that one shared thing we’ve made

and now wear, frost-stitched across
our brows. the dark
knowledge that cracks — rebounds and refracts —

and then ices its way from the corners of our eyes
and our mouths; that scars hard
in the dumb meat of our throats and

makes cheeverish masks of us all.
and in the face of all this: no
matter, not a one, our slick tricks of the trade:

fingers or hearts crossed, posts tapped
or sticks taped. those secret mantras
musk-mumbled in the corners of rubber-floored rooms.

for, more often than not, there’s simply
and sadly no hero of the play;
instead, only the surprising, sharp dark.

its hiccuping maw: the raw space
where the front teeth should be.
a choked echo of absence. hard, yes,

to swallow. harder still to digest. but,
even our notion — the sheer spectral idea, of
him, our old hero: raised arms

saluting each sluggishly-splayed minor failure
around him — requires just this,
to exist. and this absence, this injured reserve, is

more often than not,
what we’ll truly know best. and, friend,
the chore is, of course, to make do

with just this, the wide open cage with which
we’re left. at ten or twelve,
we all know, this is hard. but real disappointment,

that ill-fitted jersey
we pull down and over our heads, the one
that pinches our necks and

makes it harder to breathe, is still seasons and seasons
away. until then, my dear friend,
we still play. because this is, after all, what

we have. what we’ve made. 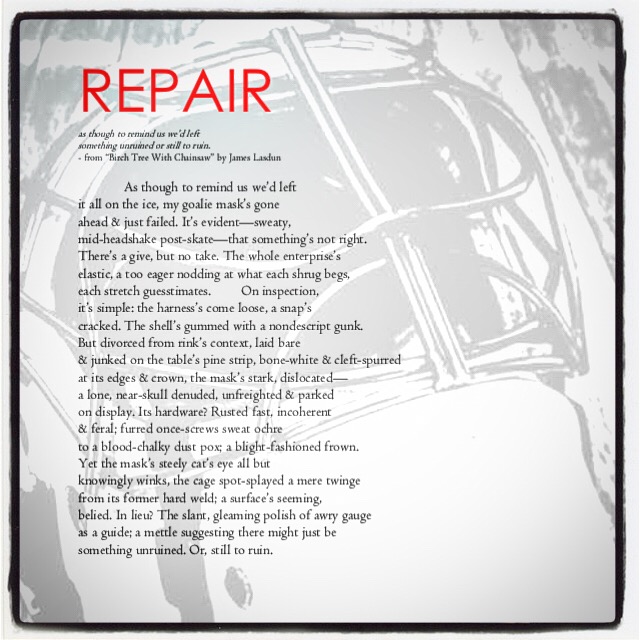 Additional links to some of Matt’s poems that are still alive, kicking about the web, and available from various online sources:

1 POEM (from Some Nights It’s Entertainment; Some Other Nights Just Work) that appeared as a part of Paul Vermeersch’s online poetry blog / project, Sunrise with Sea Monsters

1 POEM (from Some Nights It’s Entertainment; Some Other Nights Just Work) that appeared at George Murray’s NewPoetry.ca

2 POEMS (from no cage contains a stare that well and how we play at it: a list) that also appeared in the online journal Diagram are available HERE and HERE

1 POEM that appeared in Vallum Magazine

2 POEMS (from how we play at it: a list) that also appeared in the Forget Magazine are available HERE and HERE